​There simply is no tournament like it. The World Cup elevates every emotion to it’s zenith. Even the simplest of goals can cause millions to feel euphoria like never before; when your nation’s chances of world domination are on the line, every tiny detail feels like a decisive one.

Throughout the tournament’s existence since 1930, it’s safe to say that almost every corner of the world has felt some sort of ecstasy while seeing their team compete in the famous competition.

Having said that, let’s take a look at eight of the most euphoric moments in World Cup history… “Everything stops, we are alone, just the ball and me.”

With just four minutes to go in extra time of the 2010 World Cup final, everybody fretting over the potentiality of a penalty shootout, Andres Iniesta sent Spain into frenzy.

The Barcelona maestro expertly drilled the ball past Maartin Stekelenburg to spark scenes of joy, and truly showed his class by dedicating his strike to the late Dani Jarque; an Espanyol defender who had died of a heart attack.

Classy even in the most frantic of moments. “You’re in that moment. That’s the feeling. After the first two touches…that moment! It’s like your life has led up to this moment.”

Dennis Bergkamp famously said that after his first two touches, he knew it couldn’t go wrong. And right he was. After plucking Frank de Boer’s long ball out of the sky with ease, the Arsenal legend poked the ball home to send Holland into the World Cup semi finals. To the annoyance of every Englishman soon after the realised it hadn’t quite gone in, Raheem Sterling’s, erm, wonder strike did fill the entire nation with euphoria at first.

The then Liverpool forward let rip against the Italians from 30 yards out, where his shot then rippled the side netting as if to look like it had found the back of the net.

Even the scoreline changed to 1-0; the nation was euphoric, but then felt rather silly. It’s a story that will probably never happen again. A 17-year-old leading his county to World Cup glory.

Pele’s brace in the final against Sweden sparked wild scenes after the final whistle; it is believed that the teenager even fainted in disbelief. If that’s not a euphoric moment, you don’t know what is. With just seven minutes of extra time left to play, substitute Mario Gotze took the World Cup final by the scruff of the neck.

The Germans had been quaking in fear just at the sight of Lionel Messi potentially penetrating their defence, so the Bayern Munich man’s goal took a huge weight off their shoulders and sent them into euphoria. With the score tied at 0-0 in extra time, both Italy and Germany must’ve been filled with nerves. So, when Fabio Grosso curled home a beautiful opener, the jubilant scenes were understandable; even Gianluigi Buffon ran up from his goal to get involved.

The resulting celebrations are up there with the most joyous scenes in World Cup history, and the Italians took full advantage by going all the way in the final to secure the trophy. 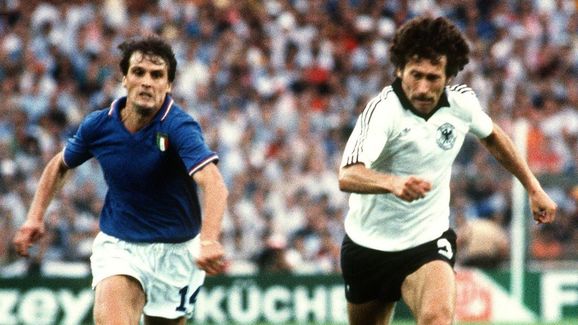 ​​When Marco Tardelli doubled the Italian’s lead against West Germany in the 1982 final, his celebration captured the heart of millions.

The look on his face, one of sheer, uncontrollable emotion, perhaps created the most euphoric moment in World Cup history.

“The joy of scoring in a World Cup final was immense, something I dreamed about as a kid. My celebration was a release after that dream”, said Tardelli after the event, and boy did it show.