Argentina bowed out of the 2018 World Cup on Saturday, having emerged on the ​losing end of a 4-3 result against France at the Kazan Arena.

Jorge Sampaoli came into the tournament with many expectations. But their first game – a draw against Iceland – showed just how ill-prepared they were and they were made to scrape their way out of the group stage in their final opening-round match against Nigeria. 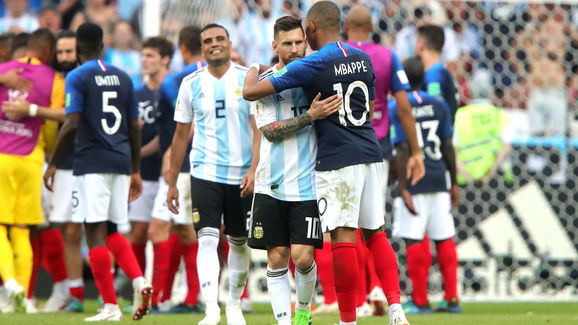 Coming up against France on Saturday, you could tell that La Albiceleste were out of their depth.

Kylian Mabappe won an early penalty which was converted by Antoine Griezmann. But the South American nation would stun their opponents, against the grain, with Angel Di Maria popping up with a worldie from distance ahead of half-time.

Messi is the first player in World Cup history to be a false nine and a false coach in the same game.

Argentina would even go ahead in the second half after ​Lionel Messi’s shot was deflected into the goal by Gabriel Mercado in the 48th minute. And for a moment, it seemed like Sampaoli’s side were set to grind out a win.

When your World Cup dreams are ended by a Cristiano Ronaldo fanboy. pic.twitter.com/BKPhglXbHy

​​But Benjamin Pavard had other ideas, hitting his own belter from outside of the box with an insane volley to put the French back in level terms.

That was when Mbappe decided to take over and haul his country the rest of the way.

The precocious 19-year-old sent France ahead with a powerful shot from the left side of the goal after picking up a loose ball and creating a yard of space with an intelligent touch.

Only four teenagers have scored in a #WorldCup knockout game:

Kylian Mbappe was only 19 when he annihilated Argentina in the #WorldCup https://t.co/bwBBrHbTy5

Kylian Mbappé with a brace in the World Cup knockout rounds. He’s 19-years-old. Deadly finisher. What a stunning performance 

The Paris Saint-Germain attacker made it 4-2 with another strike after receiving Olivier Giroud’s measured pass in the box that resulted from a quick break that was actually started by Hugo Lloris in his own box.

2 – Kylian Mbappe is the first teenager to score at least twice in a World Cup match since Pele vs Sweden in 1958. Boss. #FRA #ARG #FRAARG #WorldCup pic.twitter.com/3yS6qz5zCp

I can’t believe that’s why Olivier Giroud got booked, but the ref is right. #FRAARG pic.twitter.com/8e9n0kuRv7

Giroud assisting Mbappe in the World Cup against Argentina while Arsenal’s £50m striker sits at home and watches it like us peasants..

Giroud has had a good game. He shouldn’t be judged just on goals.

So many Arsenal fans still claim Giroud as their own. I do it too, but it’s weird as fuck.

Argentina, though, would have the final say on the scoring front in stoppage time, with Sergio Aguero, a substitute, getting a close-range header past the French keeper.

When you have Aguero, Dybala and Higuain in your team and don’t really use any of them properly then you deserve to be knocked out

But that wasn’t to be enough, as the referee’s whistle brought an end to proceedings, breaking Argentinian hearts and sending the French into a frenzy.

On to the quarter-finals!