Les Bleus’ last golden generation broke apart soon after defeat on penalties in the 2006 World Cup final, with dismal efforts at Euro 2008 and the 2010 World Cup seeing them slide to an all time low FIFA ranking of 27.

However, the shoots of recovery have been more and more apparent in recent years under Didier Deschamps. They dazzled their way to the quarter finals of the last World Cup, before reaching the Euro 2016 final on home soil. Defeat to Portugal showed their inexperience, but this new generation now has the mettle as well as the talent to go far in Russia.

The forward line in particular is mouth-watering. Antoine Griezmann won the Golden Boot and the Golden Ball at Euro 2016 and he’s only gotten better since. The likes of Kylian Mbappe, Nabil Fekir and Ousmane Dembele weren’t even in the Euro 2016 squad but are now among the brightest young stars in world football.

France can call on an array of talent unheard of since the days of Zidane, Henry and Vieira. The days of hopeful optimism are over – only victory will do. Not as easily as they should have done, due to some moments of unbelievable complacency.

Drawn into a challenging group, France got off to a terrible start when they could only draw against Belarus in Minsk. Consecutive wins over their two biggest rivals, Sweden and the Netherlands, got them back on track, but defeat in Sweden left them battling for top spot.

A second inexplicable slip-up followed as they somehow failed to beat Luxembourg in Toulouse, but they closed out the group with wins over Bulgaria and Belarus to finish top by four points. Sweden’s defeat in Amsterdam made it look more comfortable than it was.

Undoubtedly the best result of qualifying was a 4-0 home win over the Netherlands, in which Mbappe and Thomas Lemar scored their first international goals. It was a rare goal haul for the French, who only scored 14 times in their other nine group games. France shouldn’t have too much trouble with reaching the knockout stages, but none of their opponents are whipping boys in a wide open group.

They get their campaign under way against Australia on 16 June in Kazan. The Socceroos have won only one of their last nine World Cup games, and an unconvincing qualifying campaign means that they are regarded as the weakest team in Group C.

Next up is Peru in Yekaterinburg five days later. France captain Hugo Lloris was among those who wrote to FIFA asking that Peru captain Paolo Guerrero’s drugs ban be lifted, and indeed ​the ban has now been suspended, allowing him to play at the tournament.

France will hope to be through to the last 16 by the time they face Denmark in Moscow, but they may need a point to make sure. The Danes are likely to pose the biggest threat to France’s rule over the group.

Route to the Final Assuming that France win the group – and they should – they will face the Group D runners up. That could be a repeat of 2014’s last 16 game against Nigeria or Euro 2016’s meeting with Iceland, but the most likely outcome is Croatia.

After that it gets more difficult to predict. A quarter final against Portugal would give them the chance to right some wrongs, before advancing to the semis where Brazil are the most likely opponents.

If they can navigate that game, it’ll probably be Spain, Germany or Argentina in the final. One way or another, France will have to beat the best to be the best.

France announced their 23-man squad on 18 May. Necks on the line time: France will win the 2018 World Cup.

With established players enjoying the best years of their careers, new stars joining them and a manager who has been there every step of the way, France are perfectly equipped to stage a successful bid for World Cup glory.

The 2-0 win over Germany at Euro 2016 showed that this team can win the big games now, and even though they failed to win the biggest one yet, that is not a performance that the more experienced members of the team will allow them to repeat.

Many will look to Paul Pogba, the best young player at the 2014 World Cup, to lead the way to victory. But even if he doesn’t, it could be Griezmann, or Mbappe, or Dembele, or Fekir, or Lemar. The list goes on and on, and that’s why France have every chance. Their strength in depth is almost unparalleled. Numéro deux awaits for Les Bleus.

​Arsenal manager Unai Emery reportedly wants the Gunners to break their transfer record again this summer in order to bring Bayern Munich and France midfielder Corentin Tolisso to the club.

Tolisso only joined Bayern last summer in a big money move worth up to €47m (£41m), but Emery is apparently targeting the 23-year-old as part of a midfield rebuild, with Santi Cazorla and Jack Wilshere on course to leave the club at the end of the month.

According to an ‘exclusive’ obtained by Calcio Insider, Emery is keen on Tolisso for £60m. That is more than the £56m the Gunners paid for current record signing Pierre-Emerick Aubameyang in January, and would represent a third straight transfer window in which the club record has been broken following the £46.5m capture of Alexandre Lacazette last summer.

However, despite apparently being willing to let Thiago Alcantara, Arturo Vidal and a handful of others go this summer, Calcio Insider claims Bayern don’t want to sell Tolisso at any cost.

Exactly how much truth there is to the rumour remains to be seen. The story is very much that Emery is driving the alleged pursuit, despite the growing influence of head of recruitment Sven Mislintat at the Emirates Stadium.

Following Arsene Wenger’s departure and the club restructuring, control in the transfer department has shifted to Mislintat.

Emery’s role is that of coach. And although the Spaniard’s opinion won’t be discounted, him actually driving the pursuit of a player, doing the bidding etc, is highly unlikely.

​Chelsea have been tipped to go after newly available three-time Champions League winning manager Zinedine Zidane as their hunt for a new manager to replace Antonio Conte, who is still hanging on at Stamford Bridge waiting to be sacked.

Chelsea were thought to have been very keen on taking Napoli coach Maurizio Sarri, only for negotiations to hit a brick wall. The Guardian has reported that Napoli, despite already hiring Carlo Ancelotti, are insistent that a £7m release clause for Sarri must be paid.

He is no longer manager at Napoli, but the Italian remains under contract for two more years and the Serie A side won’t let him go without a fight. Chelsea won’t pay the fee, though.

It has also been said by a handful of reports that Chelsea are concerned over Sarri’s past after the 59-year-old was banned from the touchline in the Coppa Italia for aiming homophobic comments towards then Inter coach Roberto Mancini.

There is a chance it could fall apart and Chelsea are already rumoured to be looking elsewhere.

Conveniently, Zinedine Zidane is suddenly on the market and The Sun has tipped Chelsea to offer the Frenchman an immediate return to management. 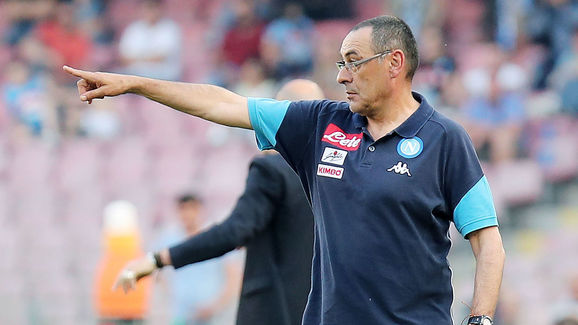 The tabloid suggests the FA Cup winners will at least make an ‘informal approach’ to gauge Zidane’s interest of moving to west London and taking on what has become a big project.

Conversely, the Daily Mail has called former France and Paris Saint-Germain coach Laurent Blanc the ‘prime candidate’ for the Chelsea job instead.

Once of Manchester United towards the end of his illustrious playing career, Blanc has been taking time off for the past two seasons after leaving PSG in 2016. The Frenchman led PSG to three Ligue 1 titles in three seasons and previously also made Bordeaux champions as well. If Sarri goes pear-shaped and moves for Zidane and Blanc fail to materialise, the Mail also notes that Chelsea have a back-up plan in place: Avram Grant. The Israeli, who was hired for the 2007/08 season after Jose Mourinho’s first departure, remains close to Roman Abramovich.

​Real Madrid have already made an approach to take Mauricio Pochettino away from Tottenham, with Marca reporting that both the Argentinian and Germany coach Joachim Low are targets to replace Zinedine Zidane.

Their hunt for a new head coach began on Thursday in the wake of Zidane’s surprise resignation, after winning a third Champions League title in three seasons. Liverpool were beaten 3-1 in Kiev.

A story from the Daily Mirror claims that Real are set for an ‘all-out pursuit’ of Pochettino, a man who has long been linked with a future at the Bernabeu after his impressive tenure at Spurs, but Marca take it one step further and claim that they’ve already made contact. They make no mistake about it – Pochettino sits at the top of their wanted list.

The Argentine masterminded a famous 3-1 Spurs victory over Real in the Champions League during the group stage of the competition and has previous experience of coaching in Spain after his time in charge of Espanyol, a club he also played for.

The problem for Real, however, is that Pochettino signed a new long-term contract with Spurs until the summer of 2023 only recently. Tottenham are understandably keen for Pochettino to be the manager who leads them into their new stadium next season and it would cost Real a fortune in compensation to get their man, even if he is considered the ‘preferred choice’ for Los Blancos president Florentino Perez.

That fortune in compensation, as reported by the ​Times, is claimed to be an insane £42m, as there is no release clause in the new deal he’s recently signed.

Reports differ on whether Pochettino has a verbal understanding with Spurs chairman Daniel Levy on whether he would be allowed to leave for Madrid if he so wished, but the London club are determined to keep their man. Whether they’ll be able to is another matter.

​Manchester United are now almost certain not to sign Gareth Bale from Real Madrid this summer following the sudden resignation of coach Zinedine Zidane at the Bernabeu on Thursday, just days after capturing a third Champions League title in three years.

Bale’s relationship with Zidane has long been thought to be strained and the Welsh winger, who scored twice after coming off the bench to win the Champions League for Real, suggested after the final that he would have to consider his future after not playing regularly enough in 2017/18. As such, United were tipped to make their fourth serious attempt to land Bale after previously failing to do so in 2007, 2013 and 2016. Manager Jose Mourinho did, however, apparently have concerns over the fee, up to £200m, that Real would have asked for.

But none of that seems as though it will be an issue now, with a report from the Daily Mirror claiming that Bale is set to remain in the Spanish capital.

Zidane publicly declared that he was stepping down because the team needs new direction in order to keep winning. But the newspaper alleges that one of the reasons Frenchman quit is that he refused a request from president Florentino Perez to begin phasing out Cristiano Ronaldo, who scored another 44 goals this season, in favour of giving Bale a bigger stage to perform.

Now that Zidane has gone, the Mirror claims that Perez will appoint a manager who will be given the ‘mission’ of doing exactly that. It potentially means a bigger role for Bale at Real next season, and therefore no long awaited move to Manchester United after all.