​​Chelsea wide man Emerson Palmieri is already a fan of the Blues’ new manager Maurizio Sarri, claiming that he has “learnt a lot” in a few short weeks of the Italian’s management.

Emerson joined Chelsea from Roma in January but made just five Premier League appearances in the second half of last season under Antonio Conte, two of which were as a substitute.

The Brazilian is hopeful of getting more game under Sarri’s regime, having come up against the 59-year-old when both were plying their trade in Serie A. 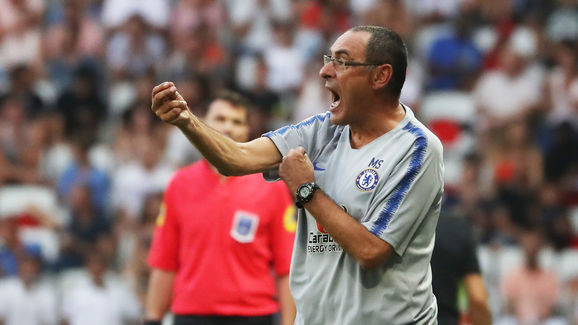 “He is a very intelligent manager and I obviously played against him in Italy,” Emerson told ​chelseafc.com. “It’s been a really positive start under him and the team have learnt a lot in a short space of time.

“Now it’s our responsibility to keep working hard in training in order to understand his philosophy so that we can have a great season.”

Emerson was speaking ahead of Chelsea’s International Champions Cup match against Inter on Saturday, which the Blues won 5-4 on penalties after a 1-1 draw in Nice. Emerson was brought on as a 64th minute substitute for Marcos Alonso.

After arriving midway through last season, Emerson is ready to make more of an impact in his first full season at Stamford Bridge. “Last season I arrived in January, halfway through the season, and it takes a little bit longer to adapt when you come in at that point,” he said.

“But now I feel totally settled and I’m ready to give my all as quickly as possible ahead of the new season.”

Emerson will hope to be involved when Sarri takes charge of his first competitive Chelsea match next weekend against Manchester City in the Community Shield.